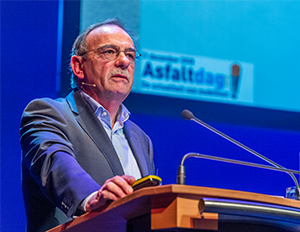 On 11 December 2018, more than 550 people associated with road building, particularly the application of asphalt pavements, attended the 11th Asfaltdag in Amersfoort, the Netherlands.

Jan de Boer, chairman of VBW, welcomed participants and indicated that the main theme for the day would be Sustainability, which links in well with the government’s ambition for road construction to be carbon neutral in 2030.

Then Max von Devivere (pictured above), the recently appointed director of Eurobitume Benelux, introduced Eurobitume’s newly-developed Life Cycle Inventory (LCI) of bitumen, which will be published in 2019. This tool will help companies to demonstrate the relatively low CO2 contribution of bitumen in asphalt production.

Bon Uijting of RWS (the Dutch State Road Authority) then gave an interesting presentation on the circularity of Asphalt, and the real ambition of the central government RWS to attain carbon neutral road pavements in 2030 - by changing contracting, execution, product innovation etc.

Next was a captivating panel discussion about innovation and durability which featured Theo Bloemsma of Mourik; Lindy Molenkamp representing Overijssel province; Wim Rollfs of Roelofs, of the City of Amsterdam; and Professor Andre Molenaar, emeritus professor of Delft University.

All the speakers sought to explain what the different actors in the supply chain try to do to move the application of asphalt even more towards circularity and sustainability.

During the networking lunch many participants visited the lively exhibition which was well populated with over 50 stands.

The afternoon started with three presentations by road owners: Geert Hendricks from the city of Nijmegen, Bas Drijvers from Eindhoven and Sjak Arts from Overijssel province. All spoke on how to implement sustainability and circularity into contracts, and how to manage assets in an optimal way. All agreed that the current road system provides the material supply source for the future and which ambition in the way of future tendering and construction also on regional and local level persists.

A second panel discussion began with short presentations by a number of companies – including AKC, Heijmans and KWS – about new innovative solutions. These demonstrated the possibilities of higher recycling amounts, increased lifetime and the potential use of bio-based products, but also warned to keep asphalt a product that should be recyclable in the future and never used as a dustbin for the waste of others.

The event was concluded by Wendy van Schaik, who indicated that the event had many items which had also been discussed at the previous asphalt day, but that the priority towards sustainability in the industry is significantly greater now. Once again, this annual asphalt day proved to be a valuable event for all participants, who made abundant use of the opportunities to meet and speak with industry colleagues.