Published by Eurobitume industry partner organisation IDRRIM (the French Institute of Roads, Streets and Infrastructure for Mobility), the 5th annual French National Road Observatory (ONR) report on the state of the 1,000,000 km road network in France, and the resources devoted to its maintenance, revealed that the condition of road pavements in France continues to deteriorate. 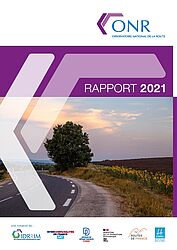 68 départements and 11 metropolitan areas, responsible for a combined 280,000 km of roads, contributed to the survey - which also included the State's data on the non-concessionary road network.

The historical data collected by the ONR highlights an important trend, the rise since 2016 in public spending on road infrastructure, showing the effort made by project owners in setting up asset management.

The increase in investment is all the more striking as the data correspond to budgets for 2020, the year of the health crisis. Despite this constraint, managers have maintained their level of investmen

Assets analysed
The State-owned road network
The French State is responsible for 11,718 km of “national” roads, upon which 80 to 90% of goods are transported – in heavy goods vehicles. 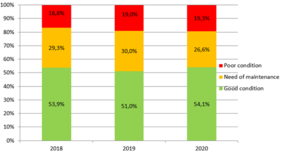 Figure: Condition of the toll-free national road network according to IQRN 3D (Quality Index of National roads 3D) 2018, 2019 and 2020 data

Roads managed by “départements” The 95 “départements”
(territorial divisions of the country with a local authority-style responsibility for managing some roads) in mainland France manage approximately 400,000 km of "secondary” roads up to the edge of conurbations. In cities, the roads are usually managed by the municipalities, unless they are national. 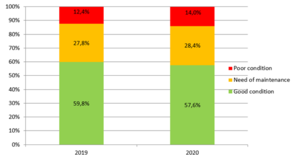