Eurobitume Deutschland’s Dr Anja Sörensen has been awarded the rare and highly prestigious Golden Needle of Honour by DIN, the German standardisation institute, in recognition of her outstanding commitment and contributions over many years to national and European standardisation in the field of bitumen and bituminous binders for road surfaces. 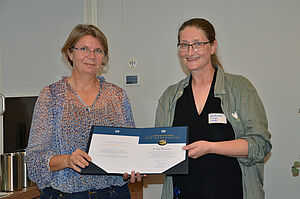 The rarely awarded DIN Golden Needle of Honour was instigated in 1967, when DIN celebrated its 50th anniversary, and is the highest recognition DIN can bestow upon anyone.

In her laudation speech Michaela Treige, on the right in the photograph, the managing director of the DIN standards committee for materials testing (NMP), thanked Anja Sörensen, on the left in the photograph, for more than 20 years of service as chairwoman of NA 062-03-32 "Bitumen; Test methods and requirements for binders” and for taking on the convenorship of CEN/TC 336 WG 1 "Bituminous binders for paving" in 2017. Mrs. Treige also referenced Anja’s excellent ability to find consensus in the committees, the key role she plays in the results of the standardisation work and her great commitment and enthusiasm promoting the development of the bitumen industry throughout Europe.

After receiving the award, Anja, who is also Eurobitume’s HSE Lead, said: “To me, supporting the ongoing national and European-level standardisation of bitumen and bituminous binders is simply a part of what I do and have done for many years. It is interesting and rewarding work with a great team of experts and friends. I would never have believed I would receive such an honour, but am immensely grateful to DIN for bestowing it upon me.“

Eurobitume Director General Siobhan McKelvey added: “On behalf of Eurobitume members and the Eurobitume team I would like to acknowledge the work and commitment that has undoubtedly been needed to achieve this high recognition from a very important stakeholder of Eurobitume.

“A huge congratulations to Anja for this very well-deserved and prestigious award, which recognises the valuable contributions she has made to product standardisation in Germany and at a European level over many years.

“Providing local guidance and advice on product standards is just one of the many ways Eurobitume supports its members, and Anja’s receipt of DIN’s Golden Needle of Honour highlights this important aspect of the work Eurobitume does”.