After nearly 30 years working with and for Eurobitume in various capacities, Mike Southern officially retired from the Eurobitume Team on 30th June 2022. 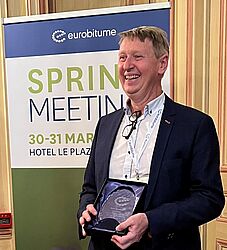 Probably best known for his commitment and involvement over many years with the Technical and HSE Committees, Mike was also Chair of the E&E Congress Technical Programme Committee; provided expert into numerous studies, reviews and Task Forces (TF); and led the production and subsequent updates of the comprehensive and widely recognised Eurobitume Life Cycle Inventory (LCI) report.

Mike was also very much involved in the preparation stages and review process for the IARC Monograph. In fact, many of the milestones that were celebrated during the 50-year anniversary of Eurobitume had some direct involvement from Mike.

“On behalf of the whole Eurobitume family, individuals from member companies and the Eurobitume team, I would like to say a big THANK YOU to Mike for all that he has done to help educate and promote the efficient, economic, effective, safe and sustainable use of refined bitumen in road, industrial and building applications”, said Eurobitume Director General Siobhan McKelvey.

Mike first worked with Eurobitume back in 1994, when he was the member representative for Shell. He initially was a member of TF Classification (now known as the HSE Committee) and then served as Chair until he joined Eurobitume as Senior Technical Consultant in 2005.

Siobhan added: “Mike is a very well-respected figure within the bitumen industry across Europe and further afield. He has been a prominent advocate for Eurobitume, providing valuable information and guidance to members on technical and HSE matters, including sustainability.

“Mike, you should be very proud of everything you have achieved helping contribute to a positive image and environment for a sustained bitumen demand.

“Finally, I would like to wish Mike all the best for a long and happy retirement, spending time with his family and pursuing the other passions he has in life outside of the bitumen world!”