Published by Eurobitume industry partner IDRRIM (the French Institute of Roads, Streets and Infrastructure for Mobility), the 6th annual French National Road Observatory (ONR) report on the state of the 1,000,000 km road network in France, and the resources devoted to its maintenance, revealed that the overall condition of the road network in France continues to deteriorate. 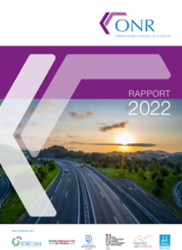 64 départements (territorial divisions of the country with a local authority-style responsibility for managing some roads) and 10 metropolitan areas contributed to the survey. Their input was supplemented by State data on the non-concessionary road network and, for the first time, data from the municipal block. In addition, thanks to Cerema, the ONR 2022 report includes data from the National Bridge Programme.

The report indicates that despite the survey covering the year of the health crisis, managers were able to protect their road budget and spending on national road infrastructure rose by 6% in 2021, as a result of their efforts to set up road asset management. 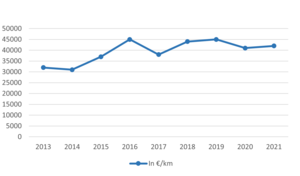 Assets analysed
The State-owned road network
The French State is responsible for 11,680 km of “national” roads, upon which 80 to 90% of goods are transported in heavy goods vehicles.

Roads managed by “départements”
The 95 “départements” in mainland France manage approximately 400,000 km of "secondary” roads up to the edge of conurbations. In cities, the roads are usually managed by the municipalities, unless they are national. 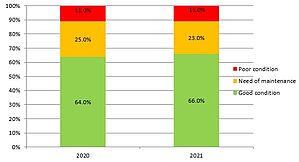 This trend analysis shows a slight improvement in the condition of the departmental road network, with the percentage of roads in poor condition stable and the proportion requiring maintenance decreasing.

While the departmental network is rather well maintained, this is less true for the state and municipality-managed networks.