Senior representatives of Eurobitume and SITEB, the Italian roads and bitumen association, had a very successful meeting in Rome recently, where the two associations re-established a good relationship and explored possible future collaboration opportunities.

Senior representatives of Eurobitume and SITEB, the Italian roads and bitumen association, had a very successful meeting in Rome recently, where the two associations re-established a good relationship and explored possible future collaboration opportunities.

At the well attended meeting, SITEB President Michele Turrini expressed his appreciation to Eurobitume for initiating the meeting and starting a dialogue to establish value for both organisations and the industry. 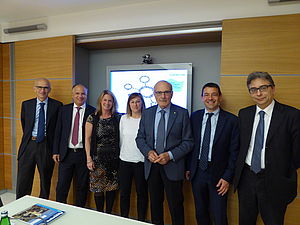 Eurobitume member company representatives Sergio Bovo, from Alma Petroli, and Maria Rita Valentinetti and Massimo Varani from Eni introduced Eurobitume’s new Director General Siobhan McKelvey to SITEB, and the two associations learned more about each other ahead of next year’s E&E Congress in Madrid.

Since the meeting, further progress has been made with developing a voice for Eurobitume in Italy. An article about Eurobitume, based on an interview with Eurobitume Director General Siobhan McKelvey, was published in the July issue of the popular industry magazine Le Strade. The same magazine has also recently been appointed the official media Partner in Italy for the E&E Congress 2020 in Madrid 12-14 May. www.eecongress2020.org

Eurobitume Director General Siobhan McKelvey added: “We hope to see some further collaborations moving forward. There has been a positive response within Eurobitume to the proposal of representing the European Bitumen industry and being actively present at the flagship event ASPHALTICA, which takes place in Verona on 21-25 March 2020.

Italy is an important market for Eurobitume, where the European voice of bitumen is valued and so is our active support for asphalt roads. We currently have two Italian core members, global oil and gas company Eni and heavy oil refiner Alma Petroli, and there is undoubted potential to increase further awareness of the Eurobitume brand with their support and through their involvement in SITEB – whose members include the main road and asphalt contractors, bitumen and asphalt producers and dealers, polymer and asphalt additives producers and manufacturers of water proofing membranes.